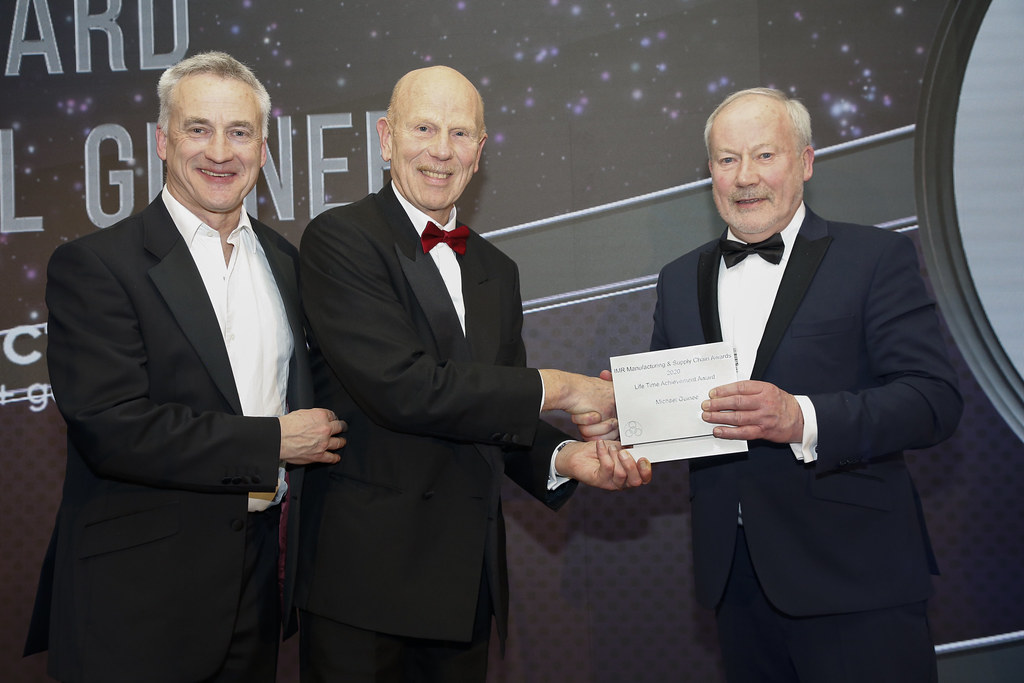 Posted at 15:47h in News by Garry Doran
Share

The recipient of the IMR Lifetime Achievement Award is Michael (Mick) Guinee, Chairman, CEO and Co-founder of Ei Electronics. The award was presented to Mick Guinee by Dr. Will Barton, FRSC, MIoD, OBE, Chairman of the Irish Manufacturing Research Board.

Mick is head of one of Ireland’s leading indigenous electronics manufacturing and exporting companies. This company is also one of the largest employers in the Mid-West region. Ei Electronics can trace is origins back to 1963 when it was founded in Shannon, County Clare, by General Electric of the US as its Irish subsidiary.

Mick Guinee is a native of Mallow, County Cork, and is an engineer by profession, having completed his Bachelor of Engineering degree at UCC, followed by a Masters degree in Industrial Engineering (MIE) at UCD. He started his professional career with General Electric in Dundalk before being appointed Managing Director of General Electric’s Ei Company at Shannon in 1983. Mick successfully led an MBO of the business with fellow Founder Directors, Dr Mike Byrne and Jim Duihanan, to establish Ei Electronics in 1988.

Mick Guinee and his team have skillfully developed Ei Electronics to become a global leader in the design and manufacture of residential fire and carbon monoxide detection products. The company currently employs over 850 people of which 750 are employed in the Mid-West region making them one of the largest employers in the region. In 2019 sales of 250million were recorded, with exports to over 30 countries worldwide.  The company has marketing subsidiaries located in the UK, Germany, France, Poland and the US.

Ei Electrics success is based on a culture of Quality, Service and Product Innovation over 30 years. Maintaining 100% of manufacturing and co-locating other key functions such as R&D, Sales and Marketing and Finance in Shannon have been key to the company’s continued growth throughout its history. Ei Electronics’ major contribution to the regional economy in Ireland was recognized last year when the company won the ‘Best Large Business Contributor to the Region’ Award, from Limerick Chamber of Commerce.

When the MBO team took over the company over 30 years ago in 1988, the aim was to maintain valuable manufacturing jobs in Shannon, and build a successful and sustainable international business. These aims have clearly been achieved and in abundance.