Plotting the Future of Industrial Technology 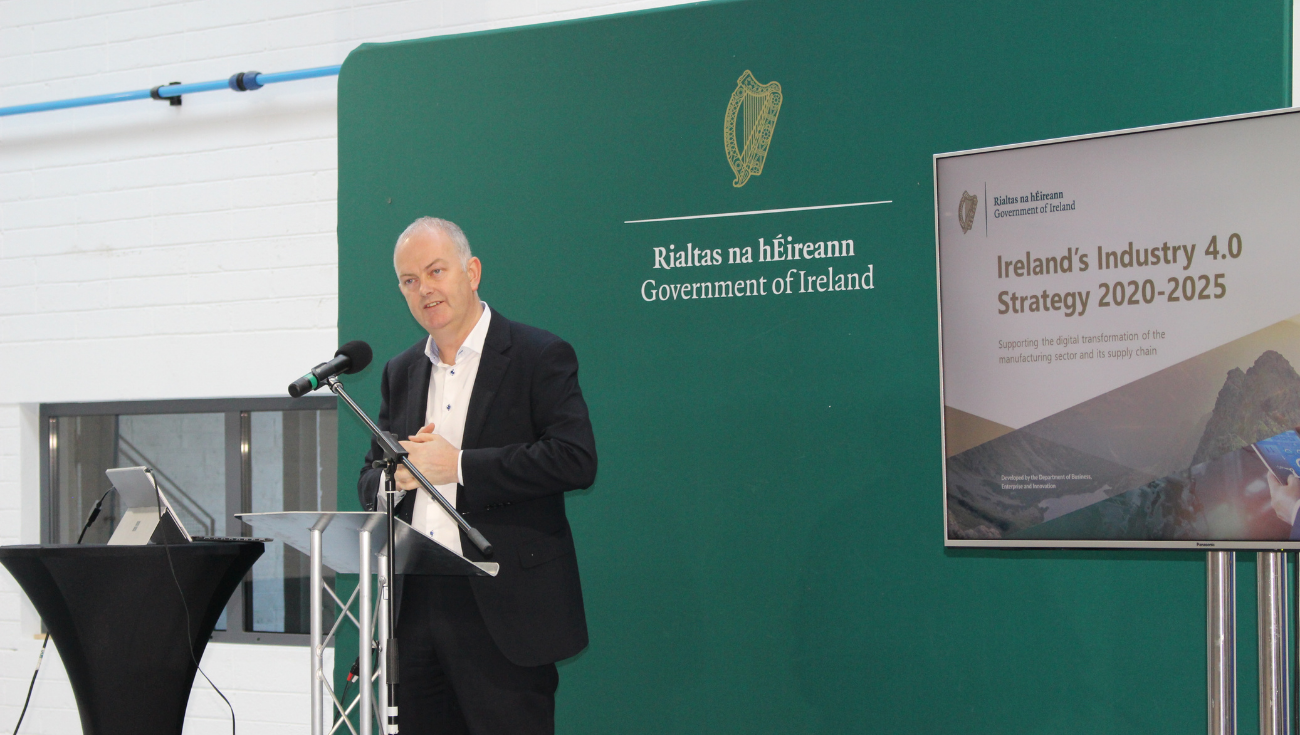 Posted at 13:41h in News by Garry Doran
Share

In an abandoned former cigarette plant on the edge of Mullingar, a group of researchers is plotting the future of Irish industrial technology. The repurposing of the old Imperial Tobacco site is emblematic of how the Irish Manufacturing Research Centre sees itself – building Ireland’s industrial base of the future on the foundations of the past, and present.

But this is not some dream factory for academic researchers preoccupied with blue-sky thinking. The centre is focused on the pragmatic manufacturing challenges of business today.

Nowhere was this more evident than in its response to Covid-19.

“As soon as COVID hit, we realised the country was in a place that it’s never been in before and that we were in a privileged position where the State had funded advanced manufacturing research,” says chief executive Barry Kennedy, a former quality control expert at Intel. “We made a decision, a business decision, to step up now and play our part.”

The first thing they did was use their 3D printers to pump out bands for making face shields for hospitals and clinics.

“I genuinely won’t ever forget – it was quite an upsetting day when an emergency department nurse from Mullingar General Hospital came in in a state and begged us for anything we could give her that looked remotely like PPE [personal protective equipment] because they had nothing.

“So we printed off loads of masks, face shields for them and got them down to them that afternoon. They’d literally take anything we had.”

The centre has been supplying Mullingar hospital as well as St James’s, Kerry General and hospices consistently since. It also started to work with client companies with spare capacity as orders dried up.

They helped them manage the switch over to producing PPE, leveraging their network of companies to develop new business links to access necessary materials for this new supply chain.

It has also worked extensively on developing an enclosed face mask to protect frontline workers and others, such as those in meat plants, who must work in close proximity to one another. And it has been involved in two separate ventilator projects.

But there is more to the Irish Manufacturing Research Centre (IMR) than responding to immediate crises like Covid. Its genesis came in the midst of our last crisis, after the 2008 financial crash. Kennedy was in a senior role at Intel at the time. Talking to his general manager, he noted Ireland’s near-unique position in having such a high density of major multinationals in relatively close proximity to each other.

“And I said, ‘I wonder could we work collectively together on common challenges that would give another reason why the mothership wouldn’t move out of the country.’ ”

He put out a call to gauge interest and, within 24 hours, had more than enough encouragement to proceed. At a subsequent meeting, the group focused on energy efficiency and manufacturing productivity.

The Government was setting up research centres at the time, so the group applied for funding and its two ideas were among the five approved. But the initiative was almost strangled at birth.

“When we got together as a cluster of companies, we said, ‘Well that’s wonderful, we’re all together now in spirit, we think it’s the right thing to do, but I can’t work with you because you’re a competitor of mine, so thanks for the lunch,’ and we’re kind of done,” he recalls.

The answer, hammered out over time, was to steer clear of anything impinging on company IP or their specific products and to focus instead on things like factory air-handling systems, production-line parts and processes and machine efficiency.

IMR now focuses on four areas – energy efficiency; sustainability; collaborative robotics/advanced automation with a focus on digitisation and the industrial internet of things; and 3D printing.

“Our job is to demystify, derisk and deliver emerging technologies for manufacturers,” says Kennedy.

They were originally based in Rathcoole outside Dublin and the Mullingar base will give them a 35,000sq ft space to use as a testbed for larger projects, such as robots, large 3D printers and a manufacturing line.

“We wanted to be on a main network where companies could come from almost anywhere in Ireland and get to our building in the morning, do a good day’s work and get home in the evening, without having to stay over,” says Kennedy.

COVID has held up progress on the Mullingar site, but work on the project is catching up. Now employing 70 people, Kennedy expects the number to rise to 120 over the next couple of years “and we could see a scenario where that could actually double again driven by market demand”.

IMR is funded by the State, industry and competitive funding streams, such as EU grants. The model is that a third of the funds come from each, though the State funding tends to be required upfront to get projects up and running and proving their worth, with industry money arriving as potential becomes clear.

The former Intel man says the IMR has punched above its weight in securing grant funding but is still little behind target on the industry side.

The centre currently works with 63 companies – 33 of them multinationals and the rest indigenous businesses – across multiple sectors. “We’re agnostic,” says Kennedy. “We don’t focus on any sector. So, we’ve food and beverage, ICT, pharma, BioMed, engineering, automotive, whatever.

“We don’t have this type of research centre in the country. We’ve great research going on in the universities, but it’s a lot more early-stage research. To have a space and a place where industry can come and get answers to these new emerging technologies, we don’t have that, and that’s why we believe this organisation, IMR, it’s so important.

“We don’t take on stuff and compete with other companies on work that they’re already doing,” he says. “Our job is to try and enable them to be successful, help Irish companies be successful, not take business from them.”

When COVID first hit, Kennedy feared for the future of the centre.

“I felt the first thing industries would do would be walk, they’d just try to barely tread water, or in a lot of cases, do nothing,” he says. “But we found we were still able to secure a number of contracts and the companies still wanted to stay with us.

“I think they began to recognise that these technologies are going to be key if they’re going to survive in the long run. In fact maybe even in the short term, because you look at scenarios where, to help reduce high density of people, having a robot working side-by-side a human being helps get your manufacturing line up, and become more productive.”

Ultimately, IMR would like to see itself as the engineering brains behind the future of manufacturing process and product.

“We’re an organisation that’s playing a critical function in the translation of all these changes that are coming. They are coming fast and furious and companies can’t keep up with it, because they’re trying to focus on the output of their products today. Our job is to tip them on the shoulder every so often and say, ‘look at this here because if you don’t you’re going to be out of business’.

The germ of the idea almost 10 years ago was just to stop a flight of multinationals out of the State in what was a historic recession. Now, in the teeth of another crisis, its ambitions have grown. And, in COVID, its rapid response to a whole new set of challenges has raised its profile and its confidence.

“It’s just amazing when you get people behind a challenge that’s bigger than themselves, what they’re willing and able to do,” says Kennedy.