Posted at 13:34h in News by Garry Doran
Share

The National Robotics Executive Committee is an initiative launched in January 2019 aiming for manufacturers and technology providers to steer robotics & automation projects directly in line with relevant industrial challenges. Previous projects carried out via this initiative include the Intelligent Production platform, a testbed for Industry 4.0 concepts, a Fully Collaborative Demonstrator, an assembly application with full human-robot collaboration, or a Highly reflective & complex-shape part vision identification, where a vision system was developed to tackle the technical challenge brought on by highly reflective parts.

The latest project developed through the National Robotics Executive Committee is a webtool allowing manufacturers to understand which automation paradigms suit their processes best – and which don’t.

With Ireland being the EU15 country with the second-lowest density of industrial robots (IFR and ILO, 2017), it is clear that robotics & automation adoption in Irish manufacturing is still hindered by several roadblocks.

One of these roadblocks identified by the National Robotics Executive Committee partners is the lack of understanding of where manufacturers should start in their automation journey. This, in turn, is deterring them from engaging with robotics altogether. Many new advanced robotics technologies, such as Collaborative, Adaptive and Sensitive Robotic systems, have now become available. This is exacerbated as the additional paradigms do not represent a single capability but rather a spectrum of solutions distributed between the human & Robot leading to confusion surrounding the Return of Investment and the process workflow. 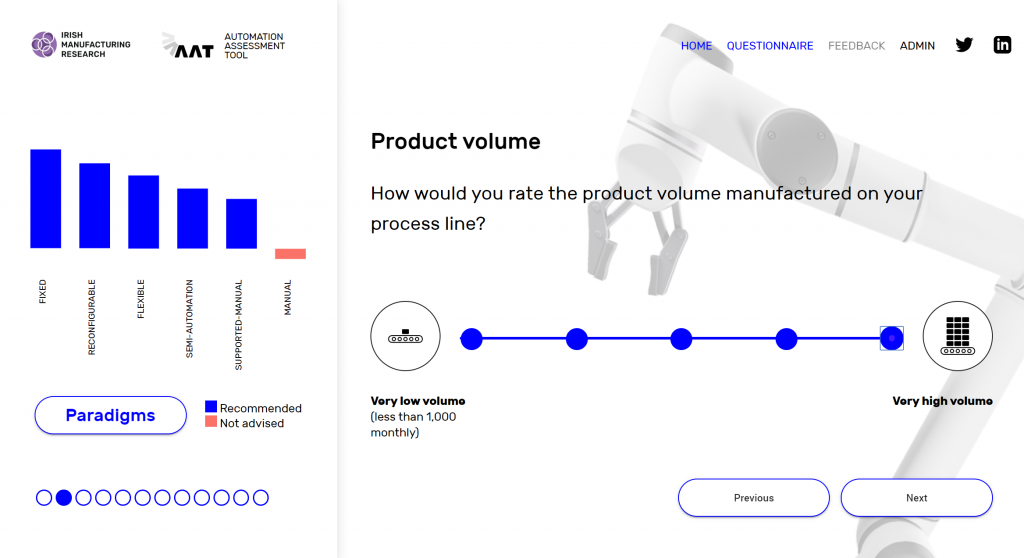 If you wish to know more about the opportunity offered by The National Robotics Executive Committee, please contact robotics@imr.ie.